By stereotype, dogs are jolly, friendly, and are the embodiment of sunshine in a room. In unusual circumstances, though, dogs can exhibit more restrained behavior. If you observe more closely, they could even look fearful or insecure.

If that dog behaves this way sometimes or almost all the time, chances are he has unresolved trauma. This is especially true for those who spent time locked in shelters or lived with an abusive breeder or household. It could also mean that he is yet to be properly socialized.

Just like any animal who could be sensitive to its surroundings, dogs could understandably be more on the timid side too. This disposition is more common in puppies, but some grow up and still be shy. And, just like any animal, dogs can attend dog training classes to develop good behaviors and that includes healthy socializing with fellow dogs and humans.

People who are yet to own their first dog may not know this, but by adopting a dog from a shelter you can expect it to not be the most outgoing at first. While some become doting the instant they are taken out from the kennel, some may need more time before becoming their cheerful and rowdy selves. But, this should not discourage first-time pet parents.

With patience and understanding, pet owners can nurture a loving environment for these shy dogs. Their shyness will not go away with a snap of a finger but, rather, it is a gradual process. As a good start, it is important to understand why they may be behaving the way they currently do:

Sadly, the world could be so ruthless as owners abandon their pets and, when they do, pets either end up unkempt in the streets or caught by animal control and detained in shelters. Do Something Org estimates that 2.7 million cats and dogs are killed each year in shelters because they need to make room for new captives and also because not many people adopt these poor animals. We can only imagine the immense stress these animals undergo daily staying in a cage hoping to get adopted, some get to their worst mental states that disqualify them from becoming adoptee candidates.

Another possible reason is they grew in an environment that kept them from socializing or were poorly bred. Many owners disregard the fact that training these dogs with good behavior is more than just taking them out for a walk. Nevertheless, the overarching problem that keeps dogs from learning how to socialize is there aren’t enough homes for the number of dogs.

A may take time to reciprocate you when you give them treats. That only means he doesn’t find his new home safe. And so, you would have to work on making them feel that they’re in a safe place.

Start by spending time being in the same room as him. You need not necessarily interact with him, more so meet his gaze. Instead, do things you would normally do such as watching the television or drinking a cup of coffee, consciously avoiding intense activities that could startle him. In the room, scatter several pieces of treats and keep it as quiet as possible, out of objects that could topple over, which could surprise him.

Making Him Approach You

Later on, place the treats closer to where you sit. From time to time, calmly talk to him so he gets used to your voice. When you think the dog is more comfortable in your presence, place some treats near your ankles and, much later, on your open palm. Avoid making any movement as he approaches and, from the moment he eats from your palm, start manually feeding him his meals. 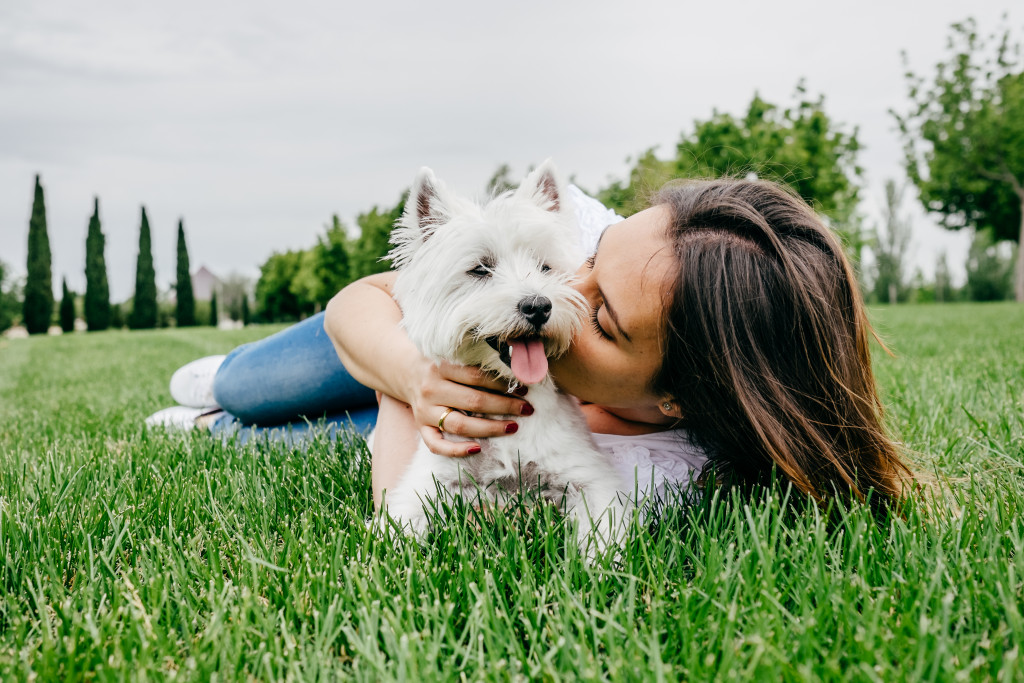 When you observe he’s no longer timid or hostile around you, put him on a leash and have him accompany you wherever you go in the house. Be patient and let him hide in his haven when he cannot yet meet the people coming over. But, reassure him from time to time and bring him out once the unfamiliar people have gone.

Teaching your dog to target or having someone train them to target will help them feel more confident and less timid. It’s as easy as holding out your open palm in front of him and clicking your clicker if he touches your skin with his nose or when he licks it. Then, give him a treat.

Let Him Socialize with Other Dogs

Start by introducing him to one dog. Allow him to bond with that dog five minutes at a time. Do not be fussy with the two’s interaction so he will not feel as if the other dog is a threat. Intervene only when he displays hostile behavior.

Helping a dog develop his social skills is a responsibility every pet parent should be willing to take. This is one way to show your selfless love for them. Helping them get over their fear and shyness as early as possible will be beneficial for them in the long run.