When it comes to headaches or migraine attacks, it certainly has something to do with issues with one’s vision. However, it is fairly uncommon, and not many people are aware that you may experience ear-related problems as well, such as earaches and even hearing loss.

It has also become well known that migraine comes with occurrences of dizziness and vertigo. Symptoms can be visible due to the effects of a disorder in the vestibular system, wherein some parts of the inner ear are affected. In some cases, migraine is accompanied by symptoms of photophobia or phonosensitivity (sensitivity to light and intolerance to noise, respectively).

This shows us that there are possible connections between migraines and hearing loss, which are not as common as other symptoms.

Can migraine really cause hearing loss?

It has been proven that migraine doesn’t cause hearing loss.

However, some hearing loss cases are somehow associated with migraine but don’t directly affect them and there is no clear evidence of what exactly goes on around this connection. In addition, what’s clear is that some people with hearing loss are more likely to have more migraine attacks. Then again, there are not enough studies to exactly determine this association.

Hearing loss can be anything in between clogged ears, which can be simply be helped by ear microsuction procedure, and tinnitus, in which symptoms include ringing in the ears, clicking, hissing, or buzzing.

As established earlier, vestibular migraine includes problems in some parts of the inner ear and brain, causing trouble for balance. This type of migraine can make you experience motion sickness, dizziness, and likely some hearing changes during the migraine attack, wherein phonosensitivty can happen.

Researchers in Egypt suggested that when the vibrations of hair cells in the cochlea (part of the inner ear) are stimulated, such abnormalities can compromise the blood supply from the brain to the auditory system caused by migraine attacks. They used the otoacoustic emissions test (OAE) to measure the vibrations in the cochlea, producing the echoes, and the auditory brainstem response (ABR) test to figure out the brain’s reaction to sound.

This suggests that the sensory hair cells in the inner ear depend on blood circulation to be able to function the way it’s supposed to. Unhealthy circulation can cause damage to the hair cells, which may eventually lead to sensorineural hearing loss.

What about the connection between migraine and sudden hearing loss?

Although sudden hearing loss is rare, a meta-analysis found that people with migraine have higher chances for sudden sensorineural deafness than those with any headache or migraine encounters.

How can pressure in the brain cause headache and hearing alterations?

Another type of headache called idiopathic intracranial hypertension is associated with tinnitus. IIH is a disorder related to high pressure in the brain. This condition is caused by too much cerebrospinal fluid (CSF) that surrounds the spinal cord and brain. An excessive amount of CSF can cause severe headaches and problems with eyesight.

In some cases, patients with this health problem experience a gushing sensation in their ears because of tinnitus. While this condition is rare, this has been more commonly found in women ages 20 to 45. Obesity is considered one of the factors, but other causes are still undetermined, such as thyroid problems and chronic kidney failures, according to the National Organizations of Rare Disorders.

When to consult a doctor for migraine or hearing problems?

Sudden hearing loss is definitely an emergency situation and must be provided with immediate care. 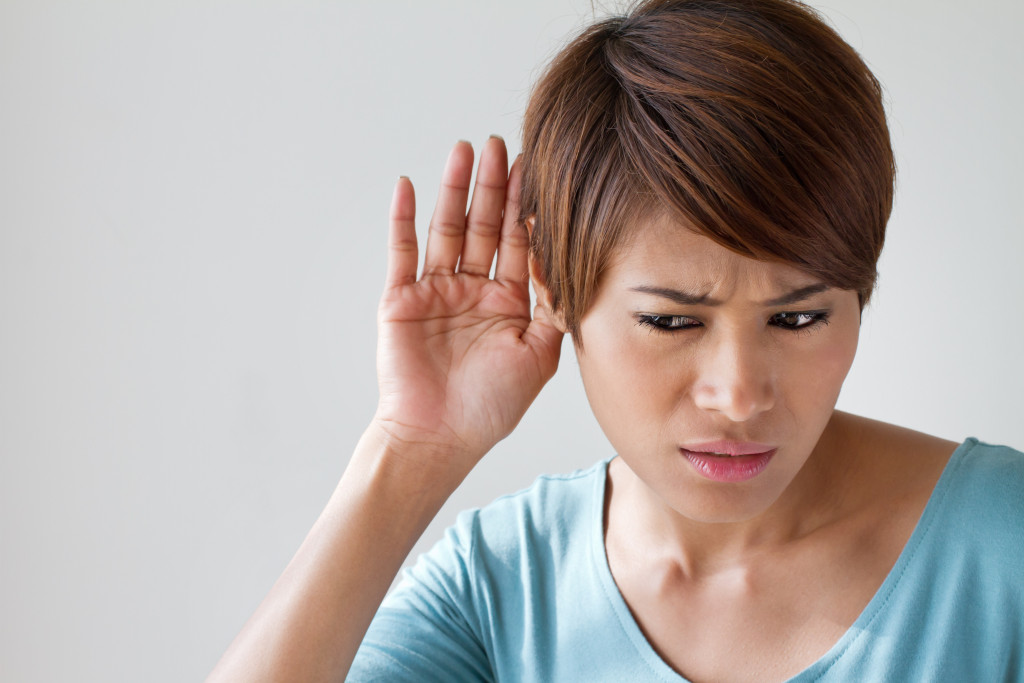 As for other signs, when you’re experiencing headaches and hearing changes at the same time, you should definitely see medical help as early as you’ve figured it out. Especially if it’s accompanied by swelling, irregular discharge, irritation in the ear, fever, abrupt weight loss, or vomiting. Some signs are less common than others, but it’s important to keep an eye on your body if there are any changes, even when it’s just a headache or ear irritation.

With individuals who experienced migraine before, the attacks may suddenly change somehow, such as becoming more frequent or the pain could be more severe. This can be the start where you can also notice hearing changes, which is an absolute red flag.

The sooner you seek help, the lesser that chance you can get a bad diagnosis. Don’t let what seems like a small pain or issue be as it can eventually be a way bigger problem. A headache or itchy ears can be a simple thing, but it’s always better to get a lookout to avoid further health problems.